Actif Epica - What an Epic day it was!

Actif Epica - Order of the Hrimthurs

Actif Epica race is a challenging self-supported ultra-endurance event in extreme trail and weather conditions in southeastern Manitoba. 130 km of winter across the sparkling southeastern Manitoba prairie on the historic Crow Wing Trail (part of the Trans Canada Trail).

The race starts in St. Malo and finishes at the Forks, the heart of Winnipeg’s downtown.  Icy temperatures, windswept trails, big skies and huge landscapes will challenge ultra-endurance racers on a course that will take approximately 8-25 hours to complete, depending on the day’s conditions (for those who are able to complete it).

Actif Epica is a partner with Tuscobia Winter Ultra and Arrowhead Ultra135 in a triple crown event known as “The Order of the Hrimthurs.”

The Order of the Hrimthurs
The Hrimthurs are legendary frost giants from the northern land of cold, ice and darkness  . Shadowy figures who are watching the endeavors of winter ultra racers, deeming them worthy of being counted among those who have slain them.  Strength, cunning and resilience are the way of the mighty Hrimthurs.  Racers who complete the 150-mile race at the Tuscobia Winter Ultra, the Arrowhead 135 Ultra and Actif Epica in the same season will receive the rare honour of being inducted into this prestigious order. In 2013/14, only five racers achieved this feat (travel mode for Tuscobia, Arrowhead and Actif Epica respectively, indicated): 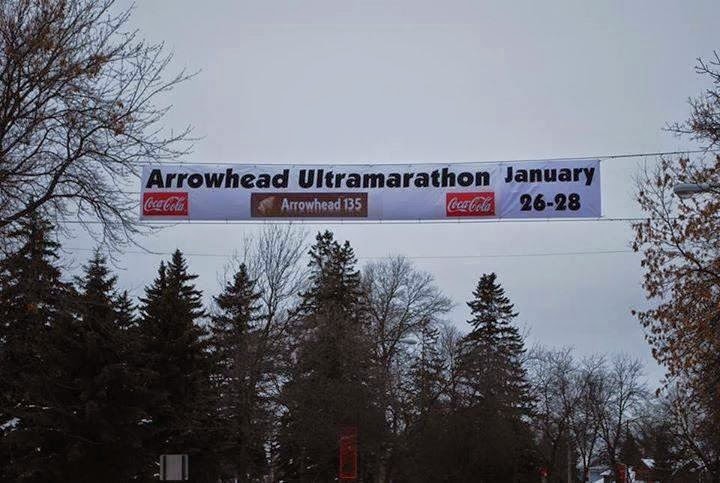 The mind drives the bus not the body! This is a quote I stole from my friend Dallas as it so describes my Arrowhead 135 race to a T.

This years Arrowhead race was a year in the making.  I don't think a day went by over the last year that I haven't thought about my DNF at MelGeorge's last year.  Come hell, high water or crawling to the finish line I wasn't about to let the race beat me twice.  Dallas, Pete and I drove to IFalls on Sat. morning.  All was uneventful except a quick stop at the border crossing where the Border Guard told Dallas his passport was not valid...for a brief few seconds we sat there in disbelief .  Then a smiling Border Guard told Dallas he hadn't signed his passport. Ha, Ha he got us good for sure.  Funny, funny but not funny really and away we went.

We did all the pre-race stuff in IFalls like coffee, coffee and more coffee along with gear check, the Arrowhead movie and the pre-race meeting.  Monday morning came fast and at 7:04 am it was game on.  My only strategy was to power walk my own pace until I got to the 1st Aid station at Gateway store and access how things were.  I wanted to get in and get out of all aid stations this year in minimal time as the longer you stay the longer you want to stay.  I noticed a lot of people running in that first 35 miles.  Something that really only mere mortals can do and still finish the race in any sort of shape.  My plan was to not start to run until I hit Ski Pulk at mile 110 if I could.  I have a super fast power walk and was eventually able to pass a lot of the people on foot getting into Gateway just after 4pm.  Once there I changed my socks, filled my bladder, bought some sun chips and a coke I had been craving for hours and got the heck out.  I think I was in and out in just over 16 minutes.


I knew what to expect in the section from Gateway to MelGeorge's as I had made it that far the previous year.  I put on my headlamp shortly after leaving along with my iPod and settled in for about a 12 hour power walk. I passed a few people along this section and eventually about 10 miles out of MelGeorge's caught up to Matt Long.  We chatted for a bit and played leap frog into MelGeorge's where we arrived just after 4am.  I so didn't want to stay here for a second longer than needed as it sucked me in last year.  I got in changed my socks, got my bladder filled had a couple cokes, grabbed a grilled cheese and food in my drop bag an headed out into the dark shortly after I arrived.  I was there for 16 minutes this year.  Thanks so much to Wendy Drake for helping me with everything so fast.

Heading out of MelGeorge you hit the road and take a sharp right.  I kind of got mixed up here and lost about 10 minutes until I saw another runner coming out and asked if I was heading the right way.  Once on the trail it was all new territory for me.  I was told that it was hilly...seriously there is hilly and then there is killer hilly.  I haven't seen hills like that since my college cross country days training on Killer Hill.  That 40 mile section from MelGeorge to Ski Pulk was relentless when it came to the hills both up and down.  This section I only saw one biker and one runner.  I came to the top of a small hill and in the distance I saw what looked like 3 wolves in the middle of the trail.  I stopped and waited for a minute or two and nothing moved.  The closer I got I realized that they weren't wolves but clumps of branches on the trail.  Kind of silly since it was daylight and I wasn't hallucinating at all.  Just beyond that I saw a sled and a runner bived which turned out to be Grant Maughan from Australia.  I wasn't sure if I should have woken him when I went by or not as he looked so comfortable, in hindsight I probably should have to make sure that he was alright.  It wasn't long before I heard someone coming up behind me and it was Grant.  We chatted for a bit and off he went in the distance.

My feet were getting wetter and wetter as the day was dragging on.  I had one pair of dry socks left that I was waiting to change them once I got to Ski Pulk but Ski Pulk wasn't coming fast enough. I could feel the water in my socks and my feet where starting to itch.  I knew trench foot was starting to happen as I wasn't able to really dry my feet well enough each time I put on the new socks since my shoes were Gore-Tex and they were already wet with the warm snow.  I decided I had to stop about 2 hours out of Ski Pulk and change the socks.  My feet looked not so great and hurt.  So many  miles still to go before I hit the aid station at mile 110...

Finally I started to see signs that I was getting closer to Ski Pulk and just in time as I was about to have a little breakdown.  Never has an aid station looked so good.  I arrived at 5:47 pm, got inside the tent and immediately took off my shoes and socks to dry my feet out.  A bit shocking my feet were and they hurt like hell.  I was a bit worried how I was going to pull off the last 25 miles on them.
A huge thank you to Robbie (Ski Pulk volunteer) for helping me my out and getting be back out on the trail fast.  I didn't spend more than 25 minutes as I could have stayed forever.  Robbie mentioned that it was only a marathon to go and putting it into that perspective I put the pain into my pain box and out into the night I went.  I left Ski Pulk at 6:16pm thinking at it would take me at least 10 hours to reach the finish.  I took an Advil and told myself to suck it up and start running.  Running actually felt better on the feet than power walking.  I ran and ran and ran.  I noticed on my GPS that the miles seemed to be clicking off pretty fast.  I never knew how far the next woman was behind me but didn't want to take the chance losing my lead so I picked up my running pace like I was running scared.  I could eventually see the red glow in the sky of the finish at Fortune Bay.  I took forever it seemed for the last few miles and then finally to my disbelief I saw the finish line.

Arrowhead 135 was a race of a lifetime for me. It's one of those races that gets under your skin.  I still cannot comprehend how I was able to accomplish what I did just 3 weeks after Tuscobia 150 and in 42:31 and 5.5 hours faster than the course record.  It truly is amazing what the mind can make the body do.  The mind drives the bus not the body!

I want to say a special thank you to Dallas and Pete for making my Arrowhead week truly special.  This is one race week that I won't forget .  Also thank you to everyone for their support and kind words and to all my friends new and old for sharing in my adventures.

I'm working on my race report :)

Round and Round we go.  Where we stop who knows as long as it's more than 100 miles! I managed to hit the 50 mile mark at around 9 hours 45 minutes and the 100 miles at 20:30.  I called it a day at 165.696kms (64 loops) in 22 hours.  My plan was to run for the entire 24HRs but my left knee started hurting around 4am.  I'm thinking due to the same direction round and round of the short loop over the hours.  After 64 loops I decided to not risk having an injury as I have a big winter planned for ultras coming up.  It was a super great event and I would recommend it to anyone. Trail Run Manitoba 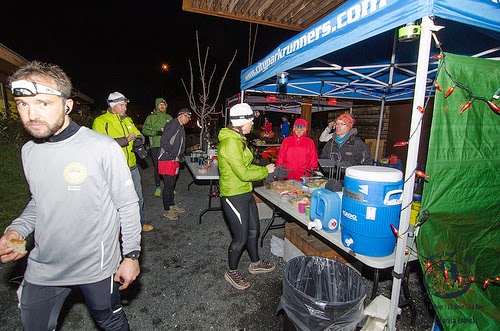 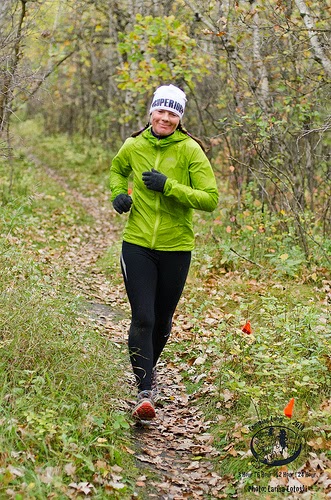 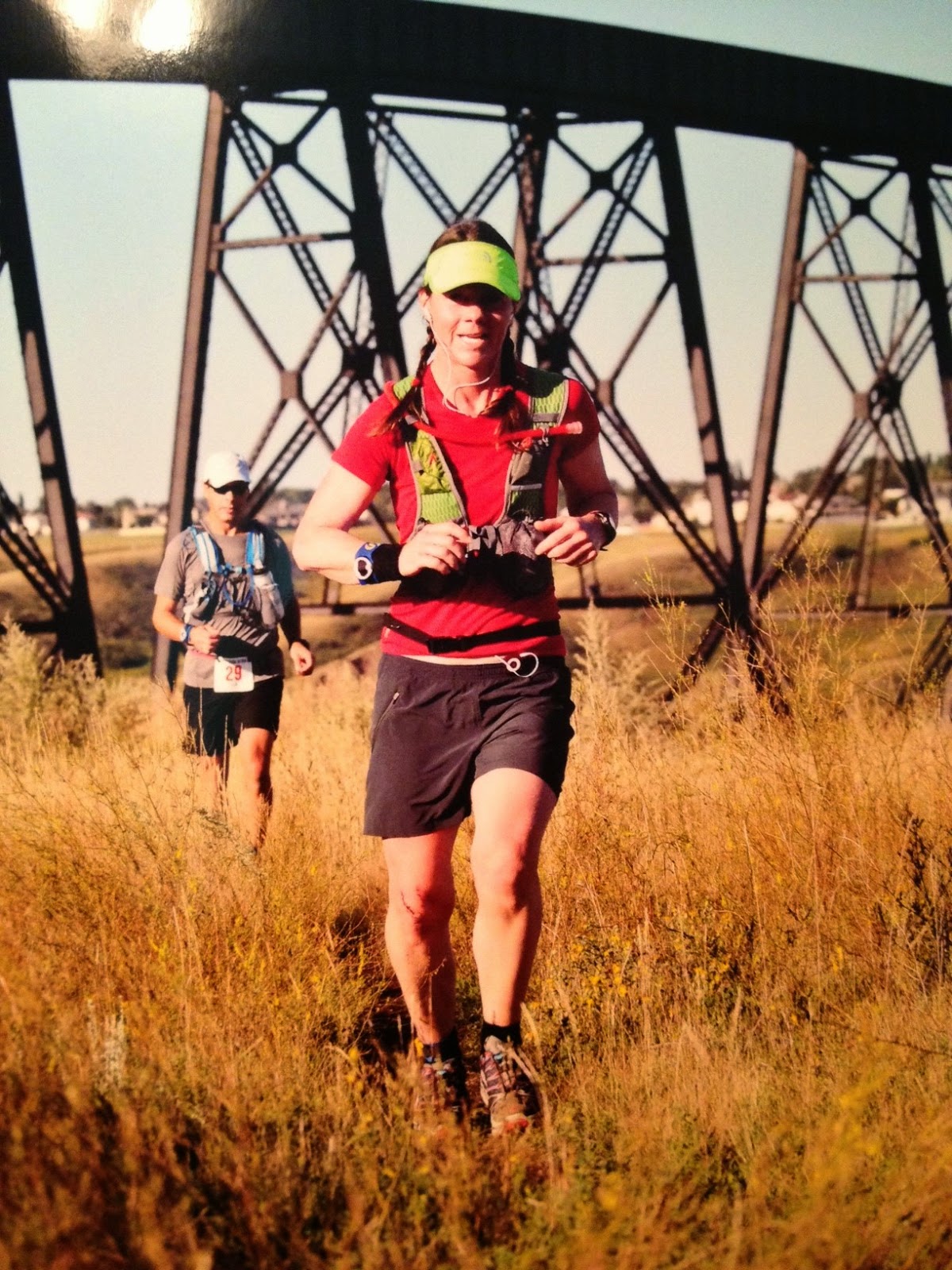 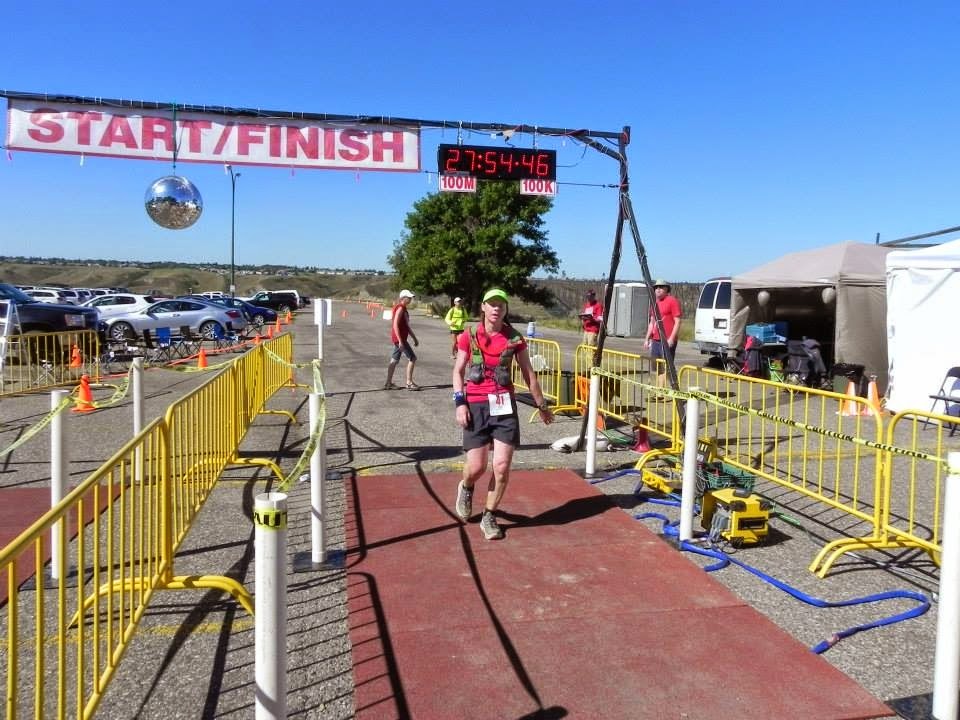 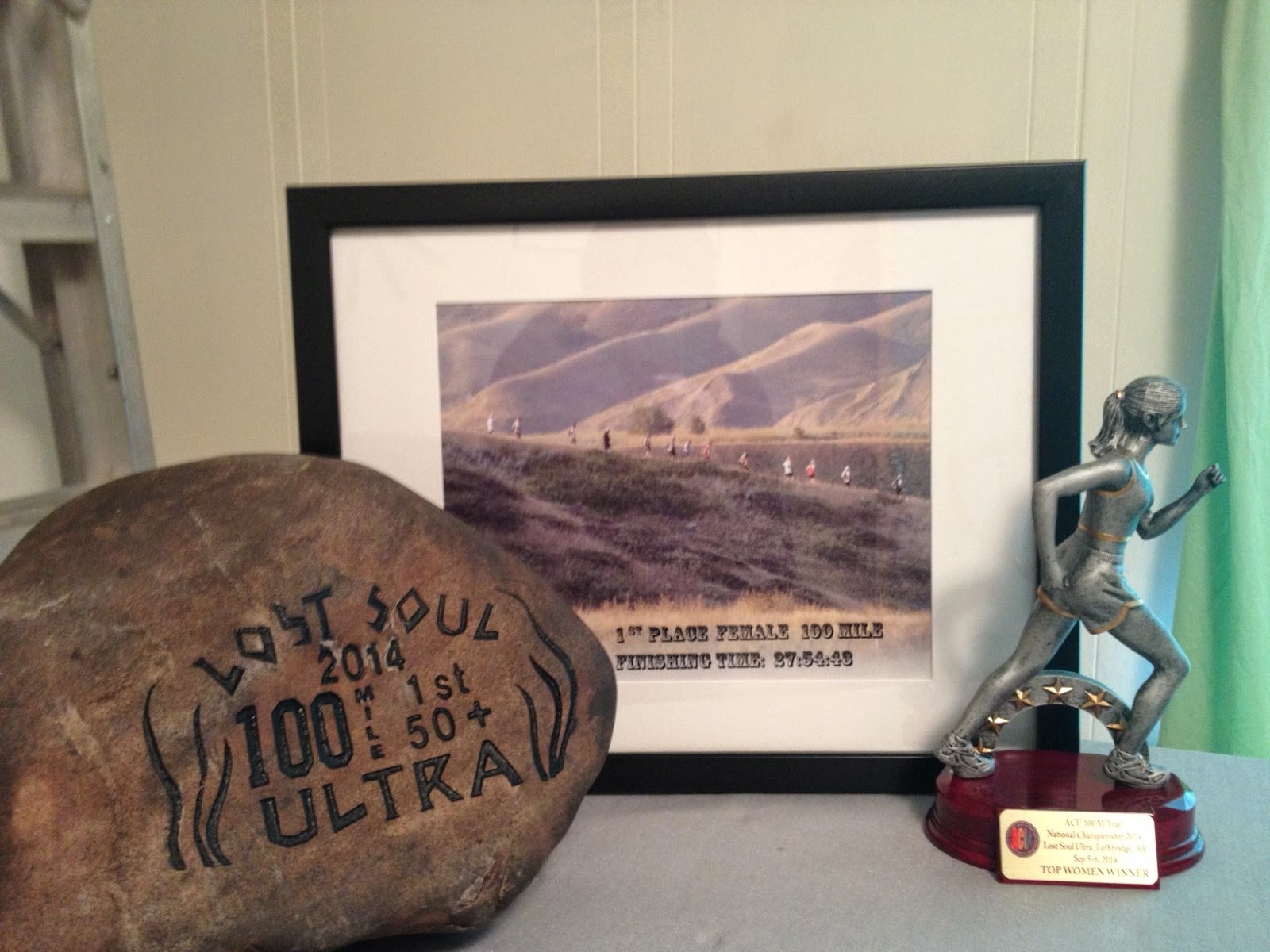 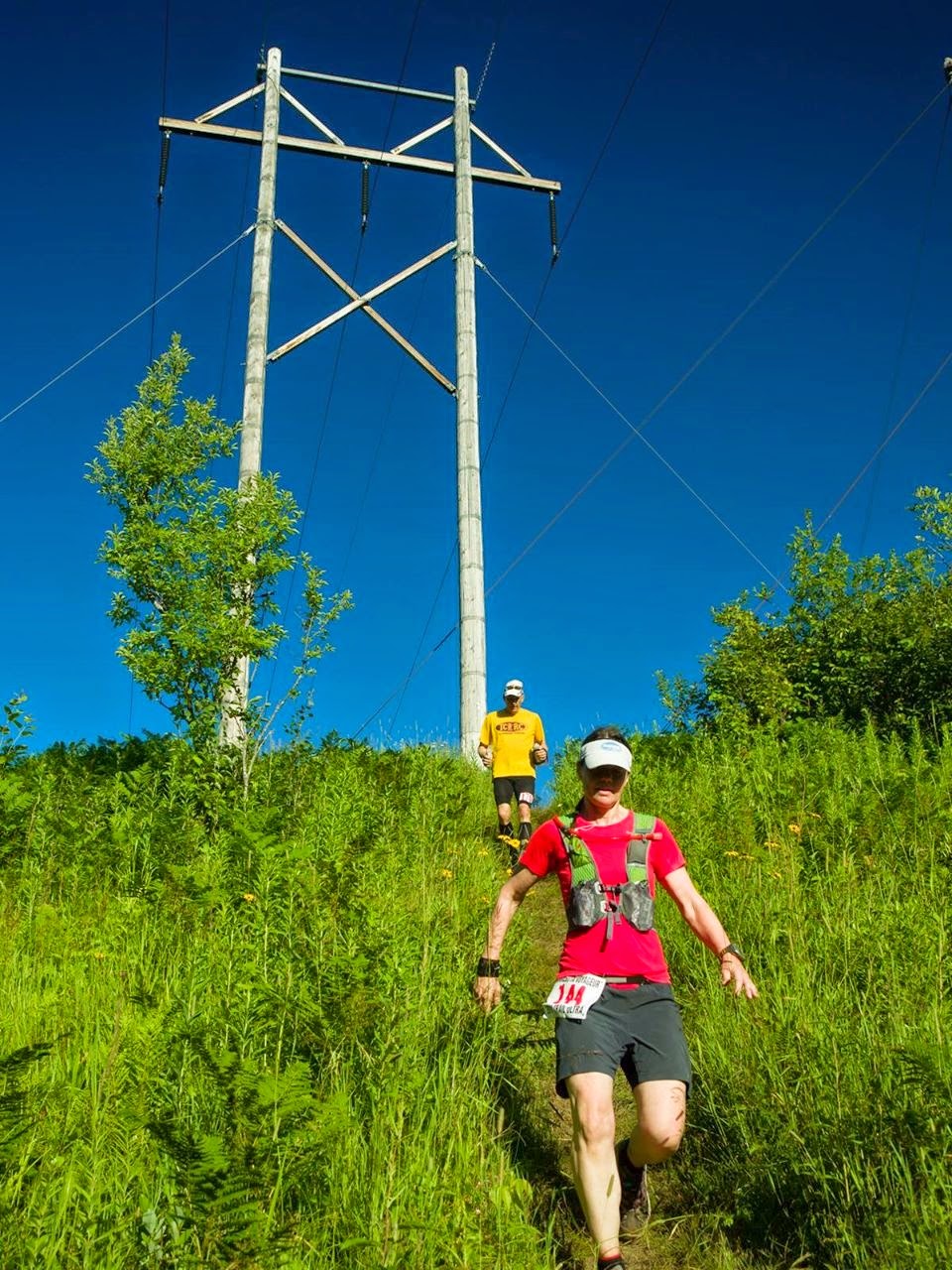 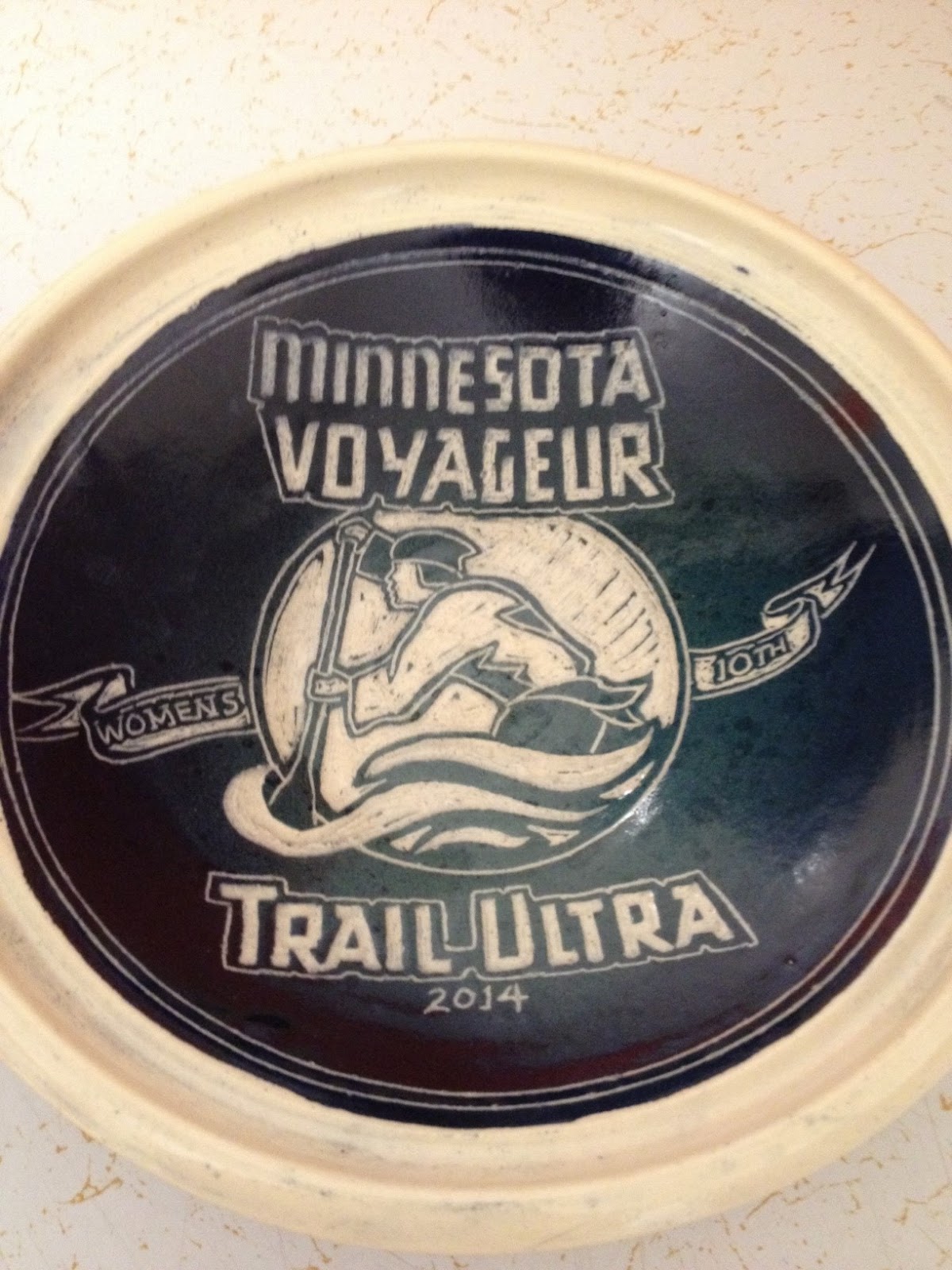